A couple of weeks ago I was leaving Brighton after a fantastic few days in the city for ffconf 2019. Over the last few years I haven't managed to make it to many conferences, and as much as I love running All Day Hey! it was lovely to be an audience member for a change and get a chance to soak up all the takeaways from the talks.

Here's a summary of what went down on the day. 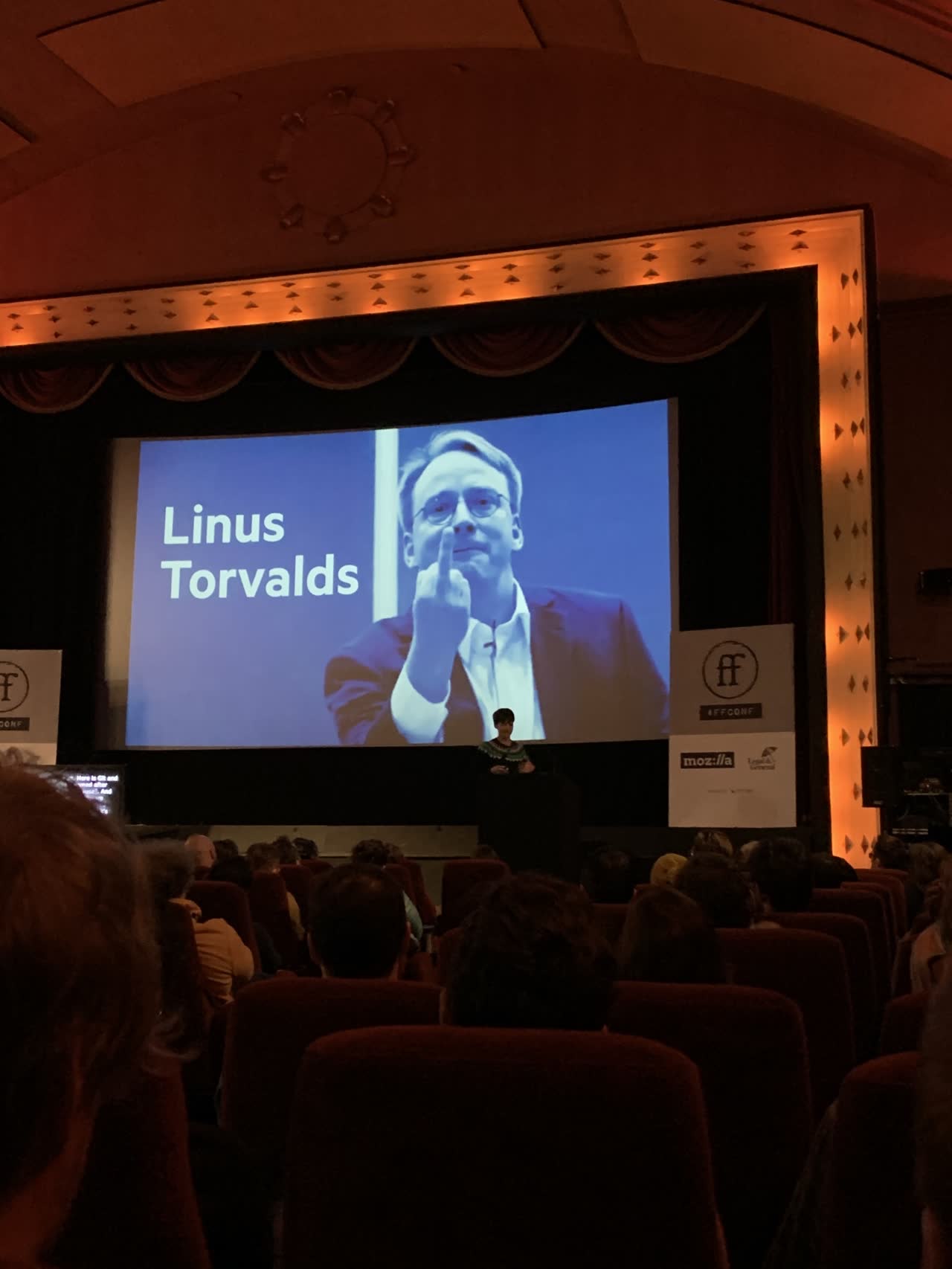 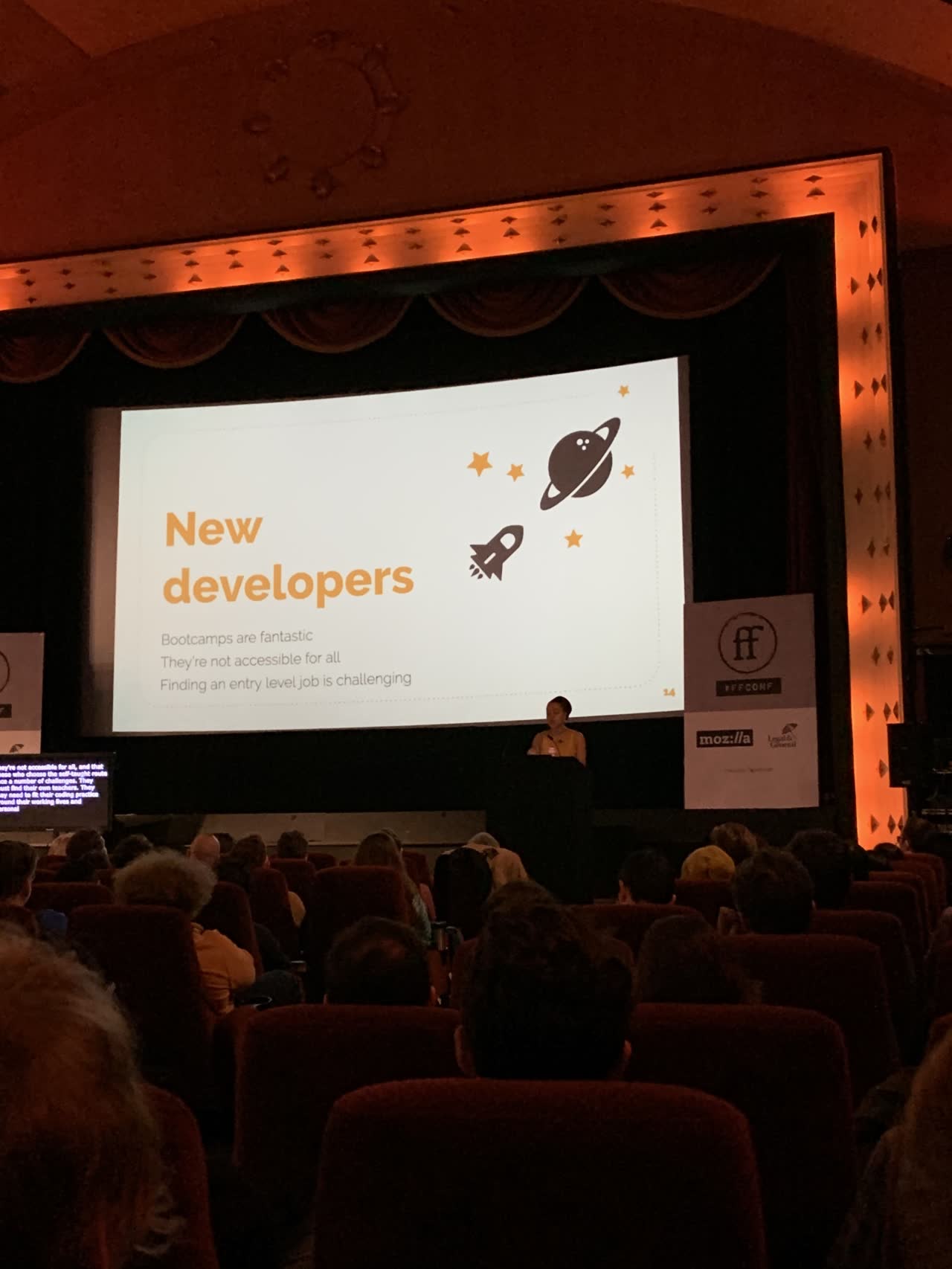 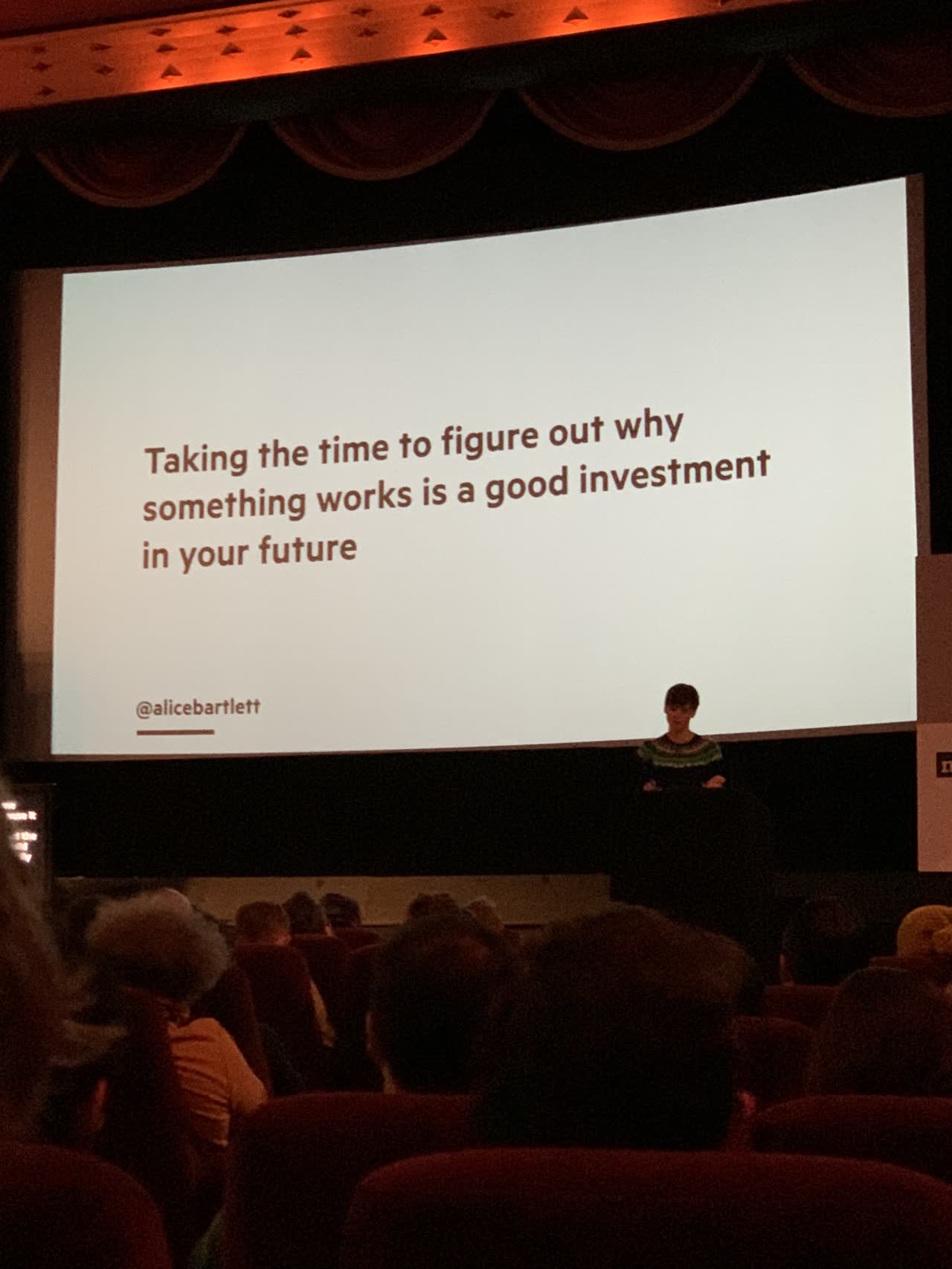 It's always a pleasure to hear Sharon speak, and we were lucky enough to have her speak at this year's conference. Sharon speaks about empathy, also known as "how not to be a dick in the workplace".

Sharon draws from personal experiences when she talks about empathy, having had a stutter for most of her life. Going into detail about some of the ways empathy is (or isn't) expressed in the workplace got me thinking about how I communicate when working with teams.

Amina Adewusi - What Does It Take To Become A Developer In 2020?

Make no mistake my friends, this is a call to action

Amina gave a very empowering talk about how we can create a better environment of support and inclusivity to welcome new developers into the industry. There were so many sound bites from Amina's talk as she pleaded from the heart about how change is in our hands. She also gave credit to developers who gave their time and support (for free) to help her progress in her career.

Alice Bartlett - Getting More From Git

This is Linus, he created Linux and Git. Two projects that he named after himself.

Alice spoke at All Day Hey! in 2018, she is an incredible speaker, and it wasn't long before she had the audience rupturing with laughter. Alice gave some great tips and history on Git, and how you can use it to become a better developer. This talk was also when I realised I've been using Git hunks for years, but never called them that (hunks are a much cooler name than "those bits of code").

The slides are on Speakerdeck and contain a collection of tips to make your daily Git usage more proficient.

The choices that we make surrounding privacy also affect our friends and family.

Laura talked about privacy and tracking in the modern world, with some home truths on why our privacy is being broken down now more than ever.

It seems to be generally accepted these days that our data is being sold to pretty much everyone, and Laura did an excellent job at calling out why this still isn't OK. This talk helped me become a lot more aware of the costs of using third-party tools (Remy admitted he'd recently removed Twitter and Facebook share widgets from his site), and affirmed my decision to keep them off this site.

I'd recommend checking out Laura's blog as well as the Small Technology Foundation she set up to help protect people in an online age. 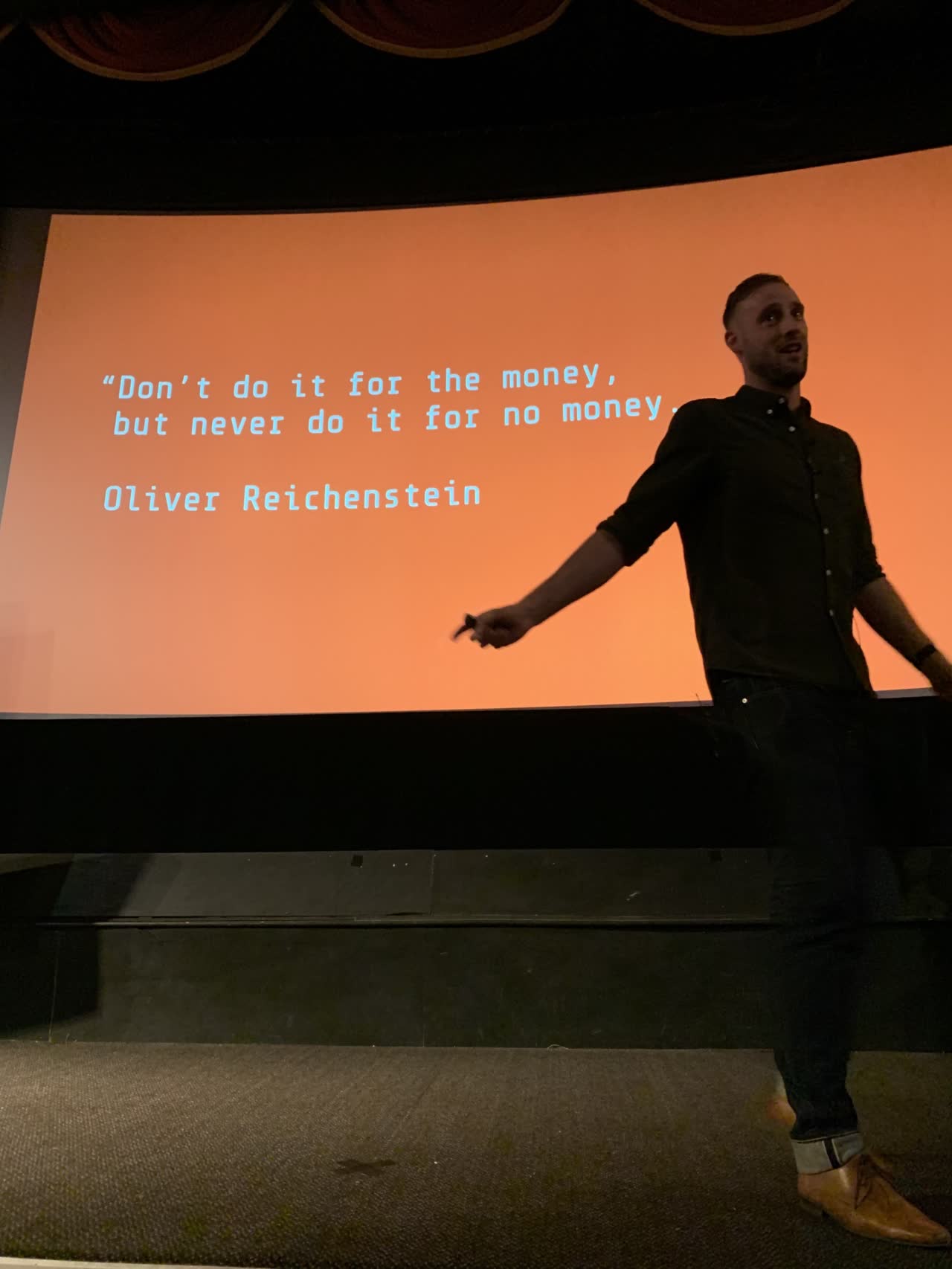 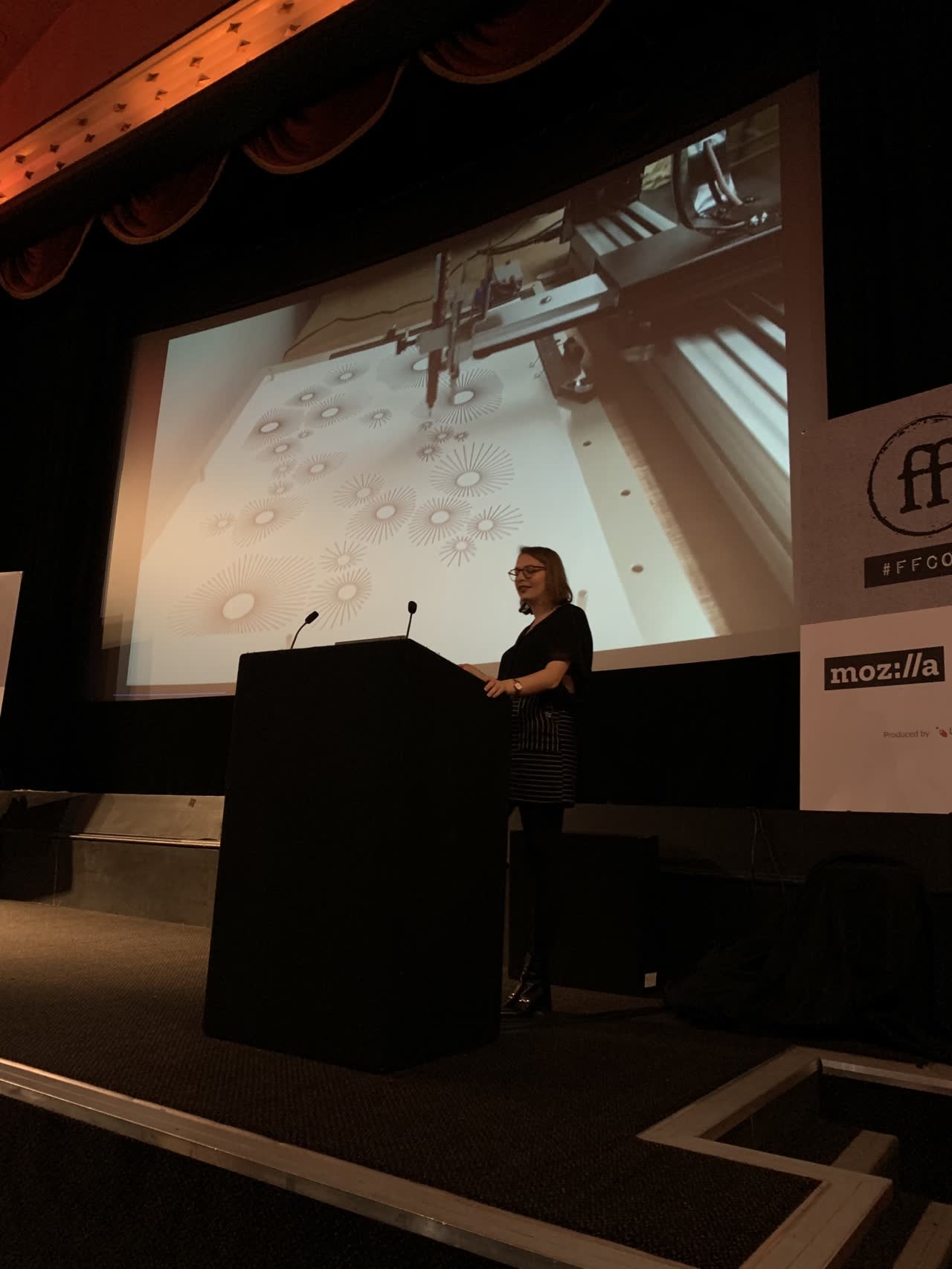 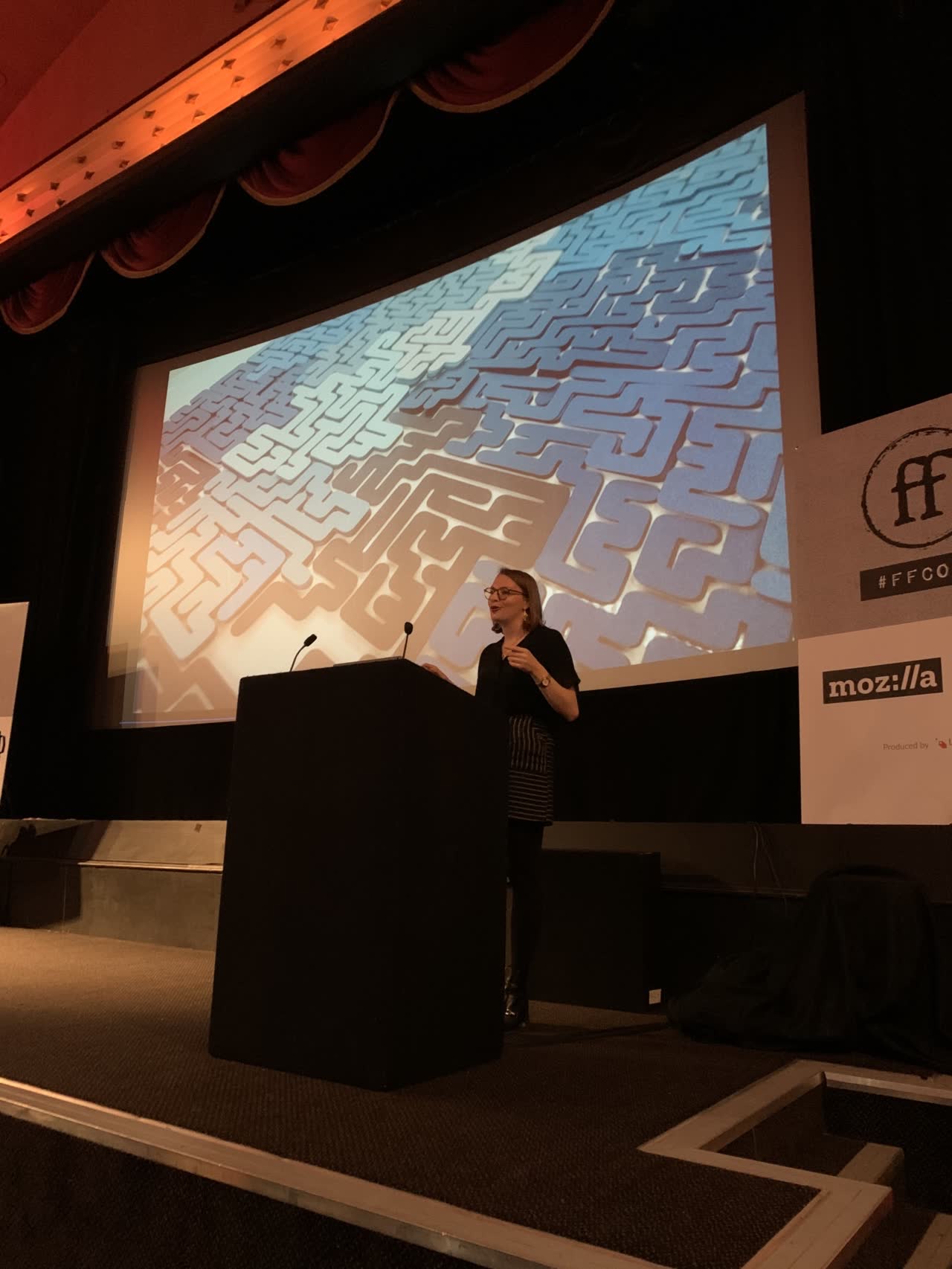 Harry Roberts - From Milliseconds To Millions: A Look At The Numbers Powering Web Performance

Harry reconvened the conference after lunch with a talk about the business impact of performance on the web. A sidestep from his usual talks about the more technical details of how to make sites fast, and he detailed some of the reasoning and methods for working to improve performance across the board.

He also went into a bit of detail about how he runs his business as a Front-end Architecture and Performance Engineer.

Don't do it for the money, but never do it for no money

There's a fair amount of content on performance and CSS on his blog too.

Following on with the performance theme, Anna took a deeper dive into debugging and improving performance issues. Jumping straight into a live demo with the Chrome dev tools, Anna showed off a few tips and optimisations that we can all make to ensure our pages are more responsive and usable.

I learnt about font-display: swap; too, which I immediately implemented on this site, so thanks, Anna!

Charlotte Dann - Taking The Web Off The Screen

Charlotte is from a creative background, having studied the intricacies of Jewellery at university, but has since gone on to use code to create generative art.

Her talk showed how code could be used to create physical art forms, including some crazy detail about how to use JavaScript to generate patterns which can transform into real jewellery pieces. It made me want to noodle around with some code to see what designs and textures I could turn into something tangible.

There was also a great example of pen plotting in action.

The final talk of the day had some fantastic examples of using USB (and Bluetooth) interfaces via JavaScript to do some cool things. In her example, Suz used a USB printer to print an image she took live on stage from her browser. The demo also had some helpful nuggets of information about wired and wireless protocols for transmitting data to devices.

Suz completely caught us all off guard when she went further into how IoT devices hijacking public radio frequencies is a real threat to our privacy in a surveillance state. She finished with a strong plea for us to be more mindful of what we install in our homes, and what giving up that privacy really costs us. Suz's talk was also a nice link into Laura's talk earlier in the day.

I also learnt about The Every Day Calendar which is the best streaks implementation I've ever seen! 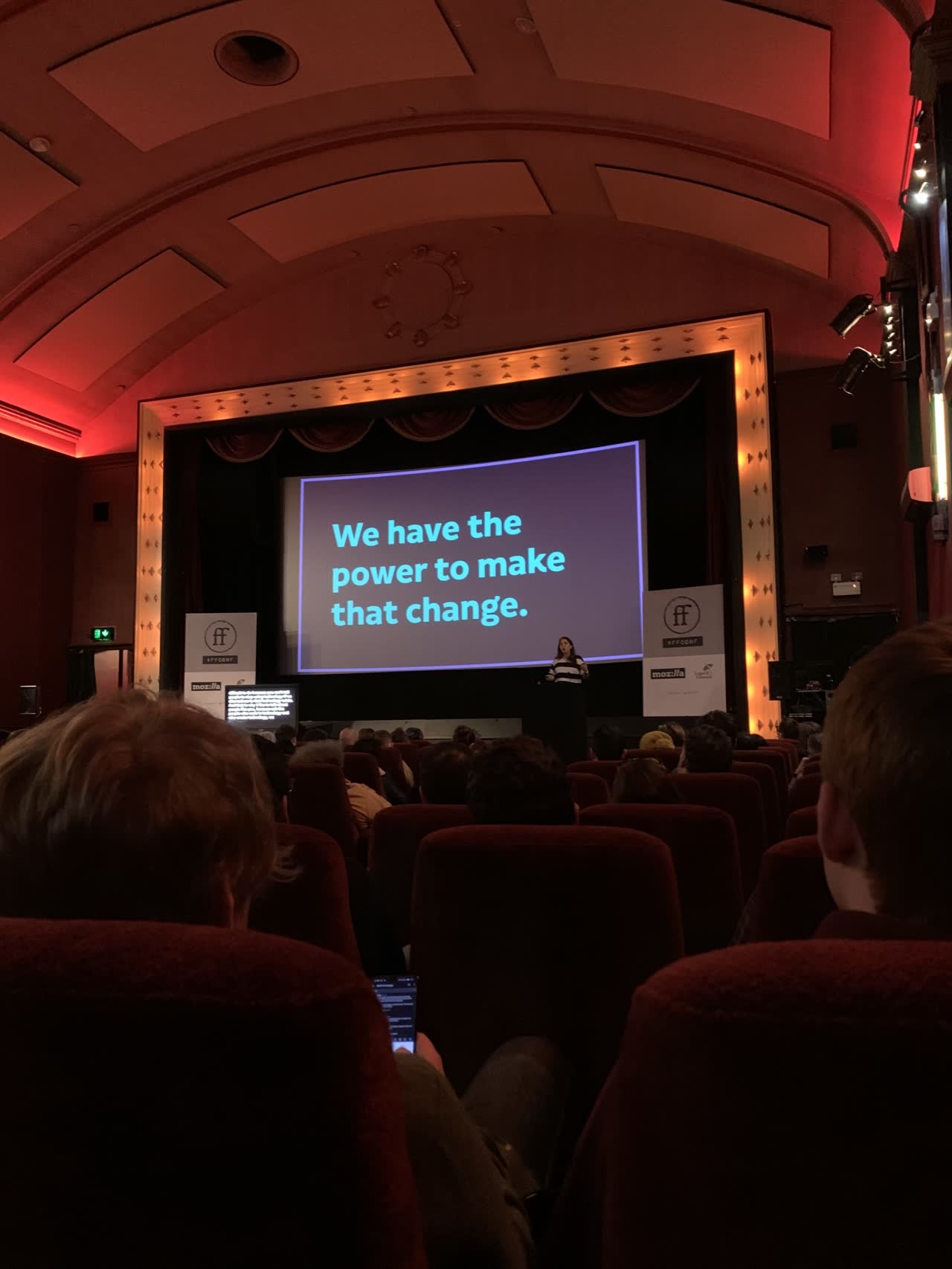 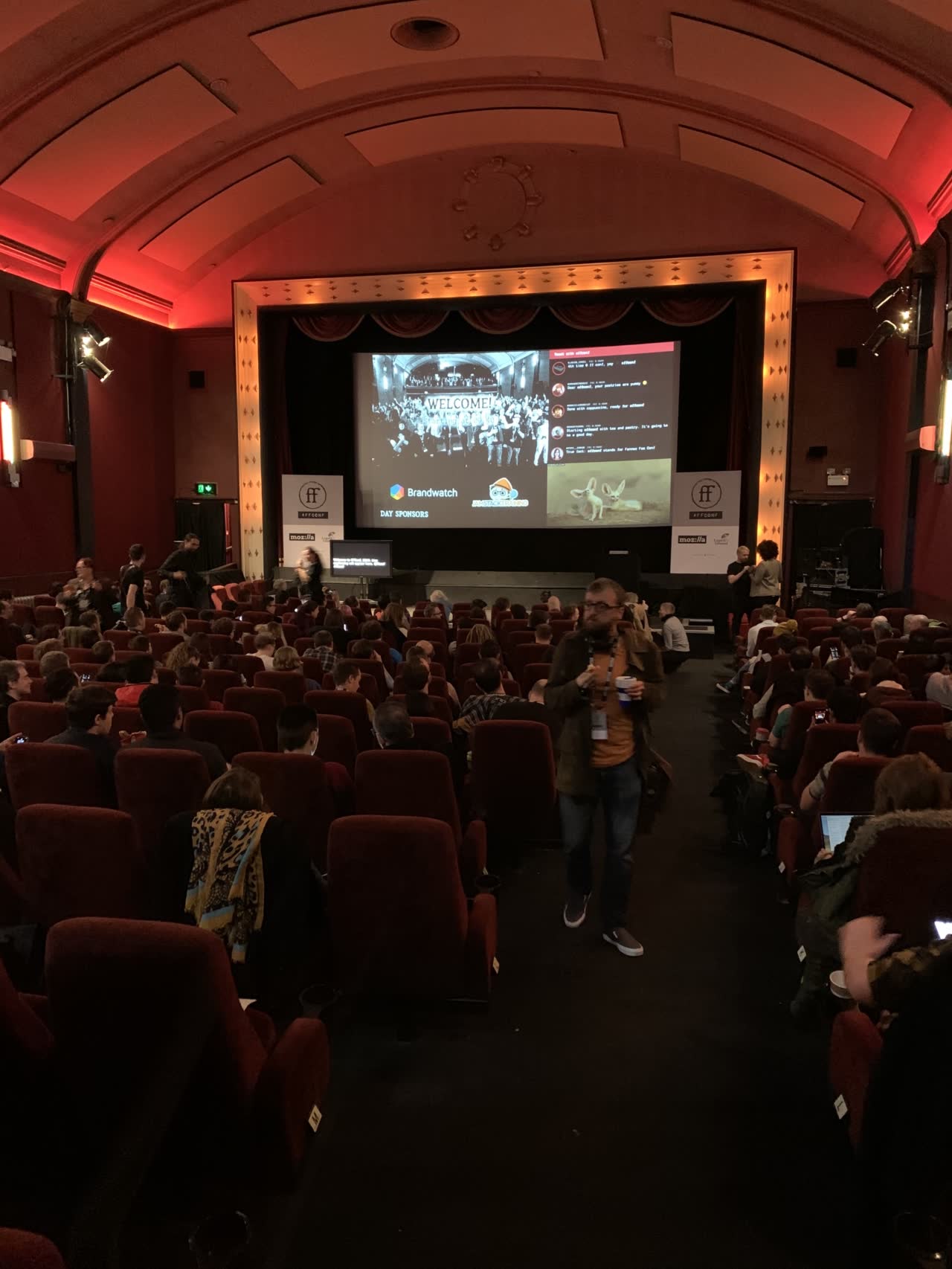 Here are some other great write-ups of the day:

Finally, a huge thank you to Remy and Julie for their hospitality. ffconf encapsulates their personalities and care for the community, taking time to make sure every detail is as it should be.

I've been thinking a lot about how we "grow" All Day Hey!, and how that could look. ffconf proves you don't need to move to a bigger venue or provide multiple tracks to be a long-lasting success. I'd be lying if I said it hadn't given me plenty of ideas on how we can improve All Day Hey! in the future (and if we make it to 11 years then I'll be over the moon).

Accepting work from April 2023Hire me